How long does it take you to write a book?

About a year—but it depends on the book, and it depends on what you mean by “write.” It took six years to complete Illumination, from when I first drafted the book, including writing a complete manuscript, throwing it away, and starting again from scratch. It took about a year from when I started over…but more of that time was spent reading for the book, or thinking about the book, or brainstorming, or revising what I’d written than was spent actually typing words into a file. The Binder’s Road took me six months of reading and thinking, brainstorming and writing fragments, and then six months of increasingly intensive production of narrative; in the three months before I delivered it, I frequently worked twenty-hour days, both writing and revising. It was pretty much the same with Triad; for the last few weeks, I was living in it continuously, including while eating and while sleeping. Sondheim’s “Finishing the Hat” conveys it better than I can.

You’re a copyeditor. Who copyedits your books?

Robert Stauffer and Rebecca Maines, both careful and experienced copyeditors, did the work on Illumination and The Binder’s Road, respectively. Copyeditors are crucial—they’re objective readers trained to pay close attention to logic and grammar and logistics and watch for the myriad inconsistencies even the most painstaking author can perpetrate. My proofreaders caught important stuff, too. I can’t thank them enough for the great job they did.

Do you base any of your characters on real people?

Not a single one. I did, however, name the Meri Isles and the Isle of Senana after two friends, and I Tuckerized in an anagrammatic way for geographical names: I used frequent chatroom typos of my friends’ names as the names for rivers, bays, mountains, and so on (and one did make it in as a character name, Jimor). The names of Liath’s mother and Liath’s village wordsmith are homage to Geary Gravel, a marvelous writer and human being who was an inspiration to me in the 1980s. And Liath’s dad looks a lot like Pat Crow, an editor I worked with at The New Yorker. That’s it!

Where do you get your ideas?

From this handy jar that sits on the ledge over my kitchen counter. 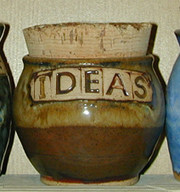 Where did you get the idea for Illumination?

The first piece I was assigned to read when I graduated from Foundry Proofreader to Query Proofreader at The New Yorker was an article about an antiquarian book dealer and expert who, among other things, assessed the value of illuminated manuscripts put up for auction at Sotheby’s. He mentioned that we can deduce the existence of traveling manuscript illuminators in the Middle Ages from the fact that a signature mark appeared on manuscripts originating from diverse geographical areas. I thought, Hmm, that would be neat—a fantasy story about a traveling manuscript illuminator. Later on, after I’d developed the idea of triads, I was looking up some other word in the dictionary while I was copyediting something, and my eye fell on the word “ennead.” Hmm, I thought… It goes on pretty much like that.

In Illumination, Liath comes to the conclusion that there must be three powers—magecraft, and two more to complement it—since everything powerful comes in threes. Will we find out what they are in the next book?

The Binder’s Road explores one of the other two powers, and Triad explores the third (and more).

Is The Binder’s Road a sequel to Illumination?

Technically, you could read Triad first and approach the other two as prequels, but so much in Triad is homage and echo and inversion of events and relationships in the other two books that you’d be missing out on the pleasure of recognition.

Where is Liath in The Binder’s Road? Will we see her again?

Good question, and yes. Liath, the main point-of-view character in and hero of Illumination, isn’t even mentioned by name in The Binder’s Road, although she is alluded to in a couple of places. That’s deliberate. The Binder’s Road explores a new light, and new characters, and some characters who were only supporting players in Illumination. For those people, Liath and her story are a memory—even a legend at this point—and their own problems are what concern them. I knew that that would challenge readers, and I believed that they would be up to the challenge. (They are!) At the end of Illumination, we see Liath preparing for a sea voyage. During The Binder’s Road, what came of that voyage is up to the reader’s imagination; but patience is rewarded, and we do see Liath again in Triad.

Why is the title so huge on the cover of Triad?

Because of the design we got locked into with the first two books, which had relatively long titles. The design folks at Tor asked my editor, Teresa Nielsen Hayden, if we could come up with a substitute title of roughly the same length, but neither of us could, so we decided to live with it. At least you can’t miss what the book’s called!

When is the German edition of Triad coming out?

I’m very sad to say that the third book won’t be forthcoming from Heyne. Es tut mir leid! That doesn’t mean that a German translation will never be published, but it won’t be for quite some time. I wish my German were up to it!

The same answer for both questions: I can’t name a favorite. I can’t name five favorites. I probably could name a hundred, but I’d be leaving out a lot of authors I admire and works I love. I’d actually rather hear who your favorites are, and what you’re reading right now and excited by. Drop an email or a comment and let me know!

Which of your own books is your favorite?

Always the same answer: The one I’m working on now.